Introduction to bolts,screws and studs

Bolts,screws and studs are used extensively in the manufacturing industry.Although similar in appearance,however,each item has its own unique purpose and characteristics.

An externally threaded fastener,designed for insertion through holes in assembled parts is called a bolt.It is usually intended to be used along a nut.

The rod with threads and a head is a bolt,and alongside it is a nut.

An externally threaded fastener capable of being inserted into the holes inside assembled parts  of mating with a preformed internal thread or forming.It’s own thread is called a screw.It has an ability of being tightened and released by torquing the head.A screw has the space on it’s head to supply torque. 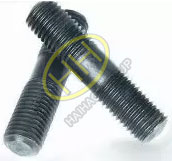 Share:
Prev： Introduction and application of anchor flange
Next： The difference between bolts,screws and stud